High accuracy magnetic ring encoders made by RLS, a Renishaw associate company, are used by Martech of Dorset in its Pan and Tilt units for positioning subsea sonar-imaging devices. The company chose the AksIM™ encoders because they offered non-contact reliability and could be easily customised for working at depths down to 3000 metres.

Portland, Dorset, was once a vibrant hub of UK defence sector technology companies. Although much of that business has since moved away, a number of firms with specialist skills remain in the area, including Martech, a company that builds Pan and Tilt heads for sonar imaging devices used to create precise and detailed 3D renderings of subsea objects.

The “Echoscope™” 3D imaging sonar devices themselves are designed and built by Coda Octopus, Martech's sister company, based in Edinburgh. “At Martech, we specialise in the design and development of technology for third party customers,” says Managing Director Paul Baxter, “but in this case the design and construction of the Pan and Tilt device was requested by our sister company. They needed an actuator capable of positioning their 25 kg sonar to an accuracy of 0.5 degrees, at depths of down to 3000 metres.”

“Our colleagues had already approached other companies to design and build the Pan and Tilt system, but had experienced a number of problems; the units were either too flimsy, unreliable, or didn't have enough torque to overcome the hydrodynamic forces that they were subjected to. Furthermore, when you buy from a third party you pay the full price and you have little control over delivery. So, they came to us and asked if we could do this within the group. It was a challenge, not least because the pan and tilt unit has to operate in such extreme environments – at great depths and pressures.”

Coda Octopus specified that the device should measure angles very precisely. To do so meant finding a ring encoder that was non-contact and therefore reliable. It also needed to be absolute, so that it would be able to measure its position immediately from being switched on.

Paul explains: “In many marine engineering projects, such as port building, for instance, the sonar imager is used to monitor sub-sea construction. When engineers are placing together enormous pieces of interlinking concrete or sinking foundations for a wind turbine for example, they have to position components very precisely. The Echoscope™ system creates 3D images that can be stitched together to give accurate, composite renderings of subsea construction sites.”

The Echoscope™, mounted on the Pan and Tilt unit, can be positioned over the side of a boat, located in a recess or aperture in a boat's hull, or even bolted on the end of an excavator arm. Almost all marine engineering problems demand a different solution.

The main shaft of the Pan and Tilt device, which can rotate the sonar at 10 degrees per second, passes through the ring of the RLS AksIM encoder. The ring, which is magnetised and features an integral code pattern, does not touch the readhead board. No contact means no friction and hence no wear, making it reliable for remote, subsea applications. The RLS encoder offers resolution 10 times greater than demanded in Martech's application. 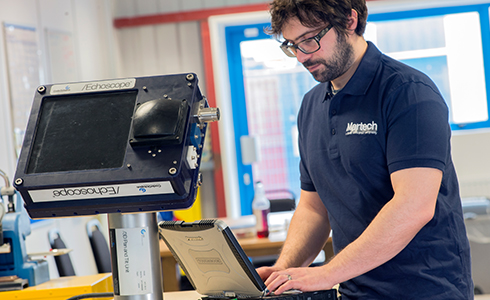 In fact, thanks to the RLS encoder, we now have a drive train that is actually capable of high torque, high precision movement. We can change the gearbox to go faster or produce higher torque, which also opens up other, potential applications.

Of course, deploying a sonar device down to 3000 metres underwater demands a rugged actuator unit that is able to withstand high pressures, cold temperatures and high hydrodynamic forces. To cope with such harsh environmental conditions, Martech created a specially designed housing.

“We are actually using a solid state oscillator as the clock; we cut out the crystal,” says Paul. “It's easy to do and it works very well. Renishaw have even drawn on our experiences to develop their own version of the encoder specifically for high pressure applications.”

Initially, Martech considered using potentiometers for measuring position instead of encoders, but Paul describes them as relatively crude devices that would have required the use of belts or gears.

“We also realised that in order to get the precision required from power-up we needed an absolute encoder,” he says, “which doesn't have to return to a calibration point before it can operate. I looked online but couldn't find anything suitable off-the-shelf. I knew Renishaw was a company we would like to do business with from an engineering perspective and the AksIM encoder, designed and built by RLS, a Renishaw associate company specialising in rugged magnetic encoders, ticked the box. It's very compact, which is important in tight confines. It was a perfect fit!”

Martech launched the Pan and Tilt unit at the Oceanology International exhibition in March 2014 and started shipping production units in June that year. The systems assembled by Martech are marketed and sold by Coda Octopus. Indeed, a number were already sold prior to the show, which initially stretched Martech's production resources – the company subcontracts all of its metalwork, assembling the product at its Portland workshop.

“This is such a specific application that we currently only sell it to customers of the Coda Octopus sonar,” says Paul. “There is a whole market out there for pan and tilt units that we aren't tackling at the moment, but there's nothing to say that we won't.

“In fact, thanks to the RLS encoder, we now have a drive train that is actually capable of high torque, high precision movement. We can change the gearbox to go faster or produce higher torque, which also opens up other, potential applications.” At present, Martech's sister company is selling the sonar devices as quickly as they can be made.

Paul states, “We are trying to get ahead of the game by building for stock. However, as soon as one unit is finished, it's despatched! For instance, we have just shipped a large number to a major subsea company – our biggest single order so far. They are using the Pan and Tilt in conjunction with Echoscope™ to provide real-time 3D imaging and visualisation on a range of tasks including sub-sea construction, cable laying and rock dumping. Some of this such as rock dumping may sound crude but it's actually a very precise operation, and is key to a lot of subsea construction for projects such as for renewable energy. In rock dumping operations, they have a huge vessel with what appears to be a tiny pimple on the side. That's Echoscope™ and our Pan and Tilt! Without it, and without the RLS encoder, they simply couldn't do the job.”